The Slate Workshops and Showroom: Open 7 DAYS, Easter to the end of September – 9am to 5pm.
October to Easter – Monday to Saturday 9am – 5pm. (Closed Christmas Day, Boxing Day and New Year’s Day).

Dog friendly, including the Great Slate Tour and Cafe.

The last self guided tour is at 3.30pm year round. 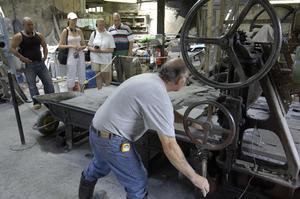 Inigo Jones Slate Works was founded in 1861 primarily to prefabricate school writing slates, when school writing slates were replaced by paper, the company had to diversify into prefabricating new products. The owner at the time, Hugh Jones, started producing electrical panels in slate. These proved to be very popular and the company rapidly expanded, sourcing its slate from the whole of North Wales.

The slate was enamelled and this was a slow, laborious process as the slate had to be baked in ovens for over 48 hours. Thousands of electrical slate panels were produced at Inigo Jones Tudor Slate Works. The world famous Queen Mary, Mauritania and the Queen Elizabeth luxury liners all had panels from these works. The original slate panels supplied to the Queen Mary can still be seen in Long Beach, California where the liner is now a tourist attraction.

As cheaper man-made products replaced slate for electrical panels, the company diversified into slate fireplaces, the majority of these fireplaces were enamelled and many of them also included hand painted local scenes. An original fireplace supplied in the late 19th century is currently on display as part the company’s self guided tour.

Over the years the company has supplied slate memorials and it still continues to do so. Technology has moved on however, and letters are now either machine cut or sand blasted as this is far quicker than the traditional hand letter cutting.

More recently the company has supplied more slate for domestic use and these include such things as flooring, kitchen work tops and hearths. Also for the home, craft products have proved popular and these include such things as wall plaques, clocks, lamps, wine racks, place mats and mirrors. The company’s current specialist products are engraved plaques, nameplates and number plates as well as  printed plaques and trophies all of which are made especially to order.

The legacy of the slate industry is easy to ﬁnd and the industry today is alive and well.  Inigo Jones Slate Works are proud to share the story of this marvellous heritage – a heritage worth protecting. Discover more about the UNESCO World Heritage Site Bide here.